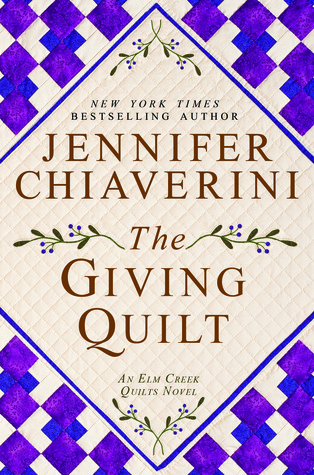 “Why do you give?” asks Master Quilter Sylvia Bergstrom Compson Cooper in The Giving Quilt, the New York Times bestselling author Jennifer Chiaverini’s artful, inspiring novel that imagines what good would come from practicing the holiday spirit each and every day of the year.

At Elm Creek Manor, the week after Thanksgiving is “Quiltsgiving,” a time to commence a season of generosity. From near and far, quilters and aspiring quilters—a librarian, a teacher, a college student, and a quilt-shop clerk among them—gather for a special winter session of quilt camp, to make quilts for Project Linus. (In real life, Chiaverini has long been active in this charitable organization, dedicated to providing handmade quilts and blankets to children in need.)

Each quilter, ever mindful that many of her neighbors, friends, and family members are struggling through difficult times, uses her creative gifts to alleviate their collective burden. As the week unfolds, the quilters respond to Sylvia’s provocative question in ways as varied as the life experiences that drew them to Elm Creek Manor. Love and comfort are sewn into the warm, bright, beautiful quilts they stitch, and their stories collectively consider the strength of human connection and its rich rewards.

Featuring not only well-loved characters but also intriguing newcomers, The Giving Quilt will remind us all: Giving from the heart blesses the giver as much as the recipient, and while giving may not always be easy, it is always worthwhile.

Be the first to review “The Giving Quilt” Cancel reply